A JAPANESE MINISTER DEEPENS HIS UNDERSTANDING OF JOHREI 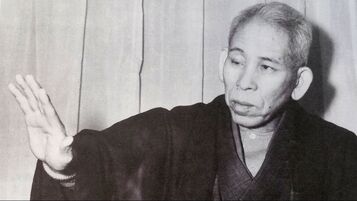 This is a translated story of a Johrei minister from Japan who went to Brasil for expansion work.

Eight months had passed since the minister first arrived in Brasil. Rev. Watanabe was the head of the Johrei Church in Brasil at the time. The Japanese minister wanted to be like Rev. Watanabe, a noble and distinguished minister having profound spiritual wisdom. Rev. Watanabe asked the minister, "To how many people do you give Johrei everyday ? He replied, "Seven to eight people. " Rev. Watanabe responded, "That's it ? You don't speak Portuguese very well, and you don't have many experiences. Do you think you can spread Johrei by channeling to only seven to eight people a day? I think you don't like giving Johrei. Maybe Johrei is an obligation or chore to you. It's  work. That's why you give Johrei to only seven or eight people. If you really liked giving Johrei, you would be channeling to many more. You should relax and not work so work. If you really like something, you will naturally do it with enthusiasm. If you relax, you won't work so hard, but the power of Johrei will be stronger, and you will not get tired. You need to channel to at least 30 people a day. If you can't do this, please go back to Japan",  scolded Rev. Watanabe.
Following the scolding, the minister took a bus to go back to his distant church in Brasil which was a 48 hour ride. He reflected on what Rev. Watanabe had said to him. The minister realized the short comings of his own thinking, and that Rev. Watanabe was correct. He cried on the bus, and made a promise to himself that he would channel to 30 people a day. On the bus ride home the minister was surrounded by strangers, but he wanted to give Johrei. He then asked the elderly lady sitting next to him if she'd like to receive Johrei. His ability to speak Portuguese was questionable at best so he used hand gestures to communicate, but alas she rejected his service.  This wasn't a good start for the minister and the heavy weight of rejection made him feel as if the ride would be much longer.  But soon thereafter, the elderly lady sitting next to him started coughing. People on the bus gave her water and candy to help alleviate the cough, but to no success.  She continued to cough for some time. Some of the passengers even complained and asked her to stop coughing. The minister then asked her again if she'd like to receive Johrei. This time she responded by saying, "Sure, if that really works." The minister prayed to Meishu-Sama and then started channeling Johrei. After 5 to 6 minutes her coughing fit ceased. The elderly lady then told other passengers that the man did this (gesturing a raised hand) and encouraged them to receive Johrei. To the minister's surprise, all 32 passengers on the bus received Johrei from him.
After this incident, the minister was able to channel Johrei to at least 30 people everyday (this didn't occur only on the bus, but at other various locations). The minister then realized how much he enjoyed channeling Johrei to others. Some of the deep blessings he experienced by channeling Johrei:  one person was cured of a stroke through Johrei, another was unable to walk, but was cured by Johrei and was able to walk again, and many, many other miracles. Through his deep experience of channeling Johrei to 30 people a day, the minister developed deep gratitude to Meishu-Sama, and realized the magnificent power of Johrei. He realized that the experiences had allowed him to grow tremendously as a person and also as a Johrei minister. A special acknowledgement of gratitude to Rev. Watanabe for his depth of love and guidance.